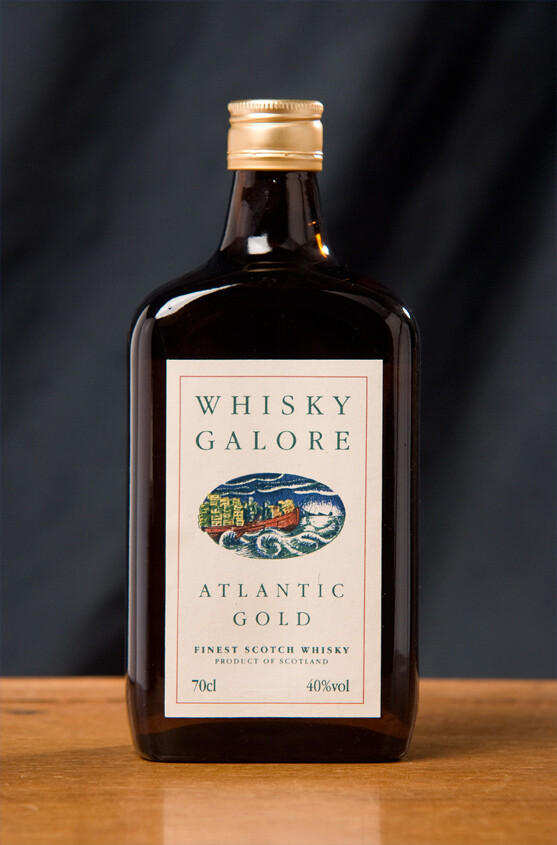 Atlantic Gold, bottles in 1993, replicates the look and style of the whisky which was the cargo on the S.S. Politician. This is the famous 'Whisky Galore' ship that ran aground on the Outer Hebrides during the Second World War. This is an opportunity to savour a 1940's whisky at a reasonable cost.

Not just a fine whisky.....but a legend as each bottle contains whisky from bottles salvaged on the last attempt to clear the SS Politician. Only 480 produced.

On the 3rd February 1941 the freighter SS Politician sailed from Liverpool, England for Jamaica via New Orleans. Along with fur coats, Jamaican currency and material from the British War Office, 21,000 cases of Scotch Whisky nestled in her cargo holds. Her route took her north to Scotland and there, two days out of Liverpool, her voyage ended. As she sailed into the Sound of Eriskay among the remote islands of the Outer Hebrides, the ‘Polly’ran aground on Calvay Island. When the inhabitants of the neighbouring small islands of Barra, Eriskay and South Uist discovered the Politician’s cargo included whisky, they didn’t miss their opportunity. The islanders proceeded to ‘rescue’ over 9,000 Cases of whisky under the very noses of His Majesty’s Customs and Excise officials.

Sir Compton McKenzie, the writer, spent the War years on Barra. After the War he immortalized the events surrounding the shipwreck in his novel “Whisky Galore”. A Subsequent film of the same title secured a place in Scottish folklore for the “Whisky Galore” story. Not all the whisky was recovered in 1941 and some stayed under the waters for 50 years. The Scottish company SS Politician PLC was formed to salvage the remaining bottles.

FREE DELIVERY on all orders

Save this product for later
Display prices in: GBP
Scroll to top